We are offering In-person services Tuesdays and Wednesdays, 10 a.m. to 2 p.m.

Recent changes to the Land Use code in the Capitol Hill neighborhoods have increased the height, bulk and density of Seattle Central College’s neighbors such that they exceed those permitted by Central’s current Major Institution Master Plan (MIMP). The college seeks to consolidate its operations to the extent possible north of Pine Street, and adjacent to its principal buildings (the Broadway/Edison Complex, Science and Math Building, and the Mitchell Activity Center).

Increasing the overall density and compactness of college operations affords the college several benefits.  Fewer and larger buildings are more sustainable to construct and operate. It also permits the college to serve an increased number of students without expended limited resources to acquire new properties. There are benefits to the community as well.  By focusing new development north of Pine and west of Broadway, valuable smaller and older buildings with character can be preserved for other uses.  Limiting the college footprint also affords other opportunities for sites in the neighborhood to be developed for commercial, housing and retail needs.

The college seeks to define within its MIMP updated development standards for Height, Bulk, and Density to align them with the neighborhood’s guidelines. In general: 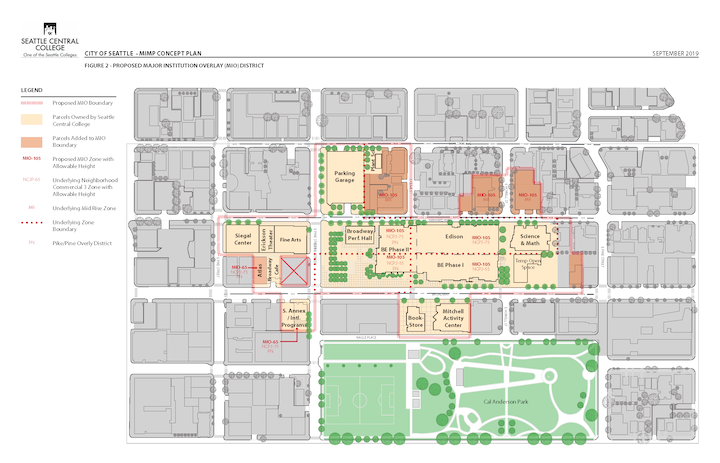 Please share any thoughts, concerns or suggestions you have around this topic by visiting our Community Feedback page and choosing Height, Bulk, and Density as your Comment Topic. Thank you!